Are you in a relationship with someone who is so kind and loving, but other times they are toxic and abusive? The relationship has intense highs and lows. When it’s good, it’s amazing, and when it’s bad, it’s hell on earth. And as time goes on, there seems to be an increasing amount of lows.

It’s common for people who have experienced an abusive relationship with a cluster b personality, like a narcissist or sociopath, to describe them as having a Dr. Jekyll and Mr. Hyde personality. 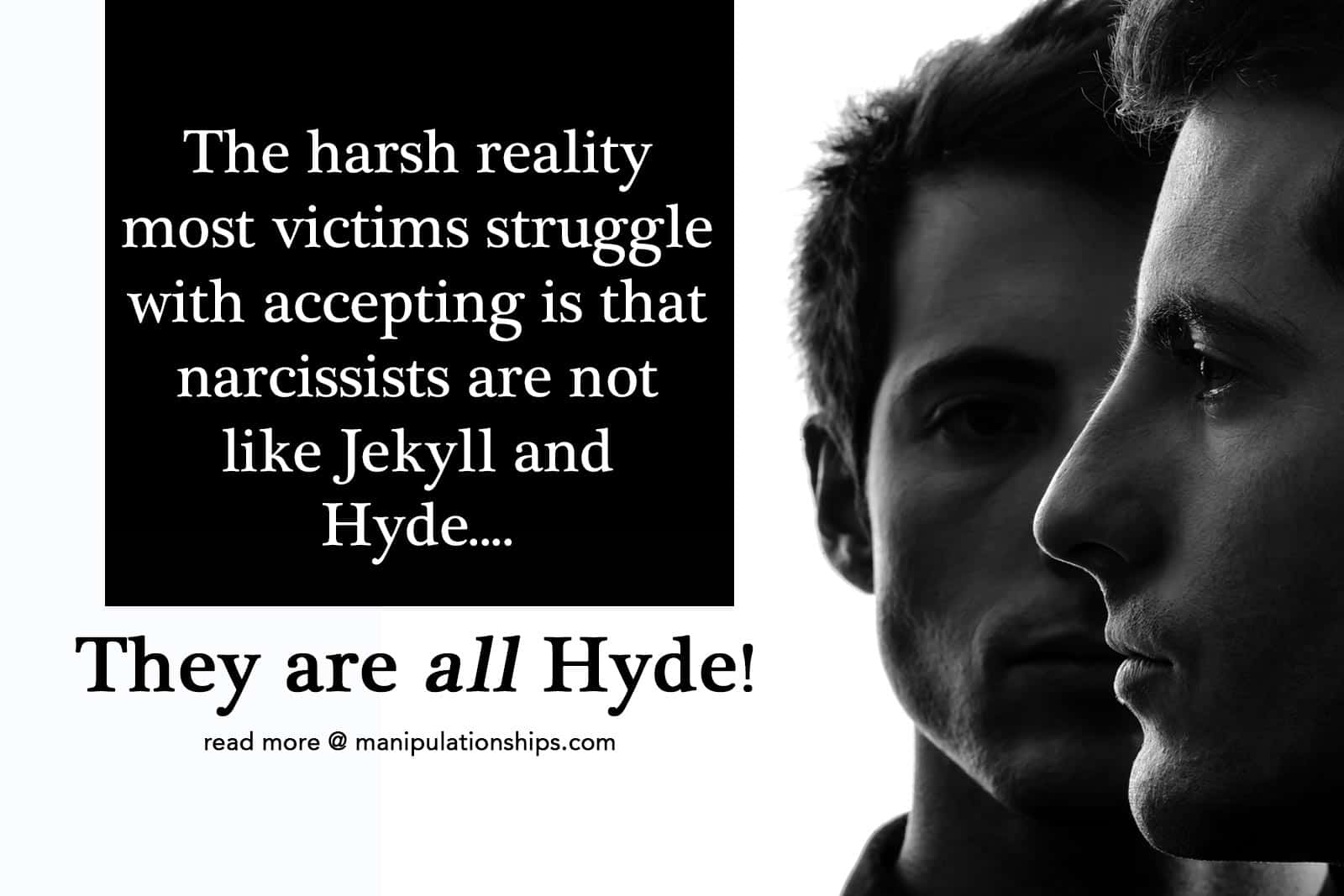 They are comparing their partner’s behaviors and personality to a story about a scientist that does an experiment on himself that ends up creating two different personalities, one good, one evil.

“Jekyll has a friendly personality, but as Hyde, he becomes mysterious and violent. As time goes by, Hyde grows in power and eventually manifests whenever Jekyll shows signs of physical or moral weakness, no longer needing the serum to be released.”

Many people in a relationship with narcissists will say they are okay one minute, even can be loving and kind, and the next they are having a temper tantrum and acting crazy, hysterical, abusive, or just plain cold. And depending on the narcissists, sometimes you are the only one that seems to see them this way and others don’t believe you if you open up and talk about it because they only see one side of the narcissists.

Narcissists Have Only One Personality

Although it may seem the narcissist’s behaviors are similar to the story, it’s important for people to understand they are not splitting and they do not have two separate personalities. Narcissists have one personality.

While your experience of them may feel like they have two personalities, the reality is they are an actor and they are just playing a role. The “bad or evil side” is their true personality, while the good side is a manipulation of their personality to get what they want in life. They learned this early on.

In other words, Hyde (narcissistic) is who they really are and Jekyll (pure, good side) is the mask they wear for the world, and only a selected few will get to see behind that mask.

This is called the narcissist’s mask. Narcissists have invested a great deal of time into the development of their masks. In other words, they have learned what works in manipulating people to get what they want in life. They know the body language, what to say, and what to do to get others to believe in their mask.

During an interview, a sociopath admitted that he smiles all of the time because people let down their guard when you seem happy. That they won’t think anything is wrong with you and it will be easier to manipulate them.

Just like an actor in a movie, sometimes people have a hard time separating the role the actor plays from the actual true person because they played the part so well.

Narcissists are actors in real life, not movies.

Narcissists suppress their true feelings and personality so they can get what they desire in the real world. They are hardwired for manipulation and this developed skill is underestimated by most. Some are more skilled than others, it just depends on their goals in the world.

There are two faces of a narcissist, but not two personalities.

Victims need to keep in mind that narcissists only have one personality. If you literally imagine someone wearing a mask, like at a Halloween party, you know they are the same person underneath, but people are responding to the character they are playing. Except, narcissists are doing this without a visible mask.

This is extremely hard for people to accept, especially those who love them. They just can’t wrap their head around the fact that someone pretends to be someone they are not and they are amazingly good at it because even when the other side comes out, they still want to believe the good side is real.

Many people in these relationships believe if they give them lots of love and support they can heal and not have the challenging behaviors that are abusive and toxic to the relationships. This false belief keeps victims in relationships for years, decades, and even lifetimes.

Narcissists do not look at relationships the same way you do, people are merely objects put on this earth to serve them. They have a distorted way of looking at the world and relationships.

Narcissists evolve, just as those of us healing do. Their tactics will evolve as they read more about narcissism and what people are starting to pick up on. If they find a new manipulation tactic that works better, is more undetected or works for a certain victim, they are certainly going to do it.

How do you handle silent treatment in marriage

How do you deal with a narcissistic mother-in-law?