What Is Narcissistic Abuse?

All abuse is narcissistic. An act of abuse means an individual is operating with a low level of empathy at that moment.

The hallmarks of narcissism are a grandiose sense of self importance, lack of empathy and exploitation of people and systems.

Emotional and psychological abuse are part of the narcissistic relationship, while physical abuse is not always present.

NPD (narcissistic personality disorder) is a clinical diagnosis, however, most narcissist are not diagnosed and most likely will never be.

The people closest to them are often the only ones that experience their personality disorder and ongoing abuse. That's why it's so important for people to be educated on signs of narcissism and the signs of emotional and psychological abuse because it can cause severe damage and set up future generations for dysfunction in their youth and adult life.

inside this article:
1
What Is Narcissistic Abuse?
2
Dr. Jekyll and Mr. Hyde Personality
3
Narcissism In Relationships
4
Victims Are Not Believed!
5
The Narcissist's Manipulation Tactics
6
Victim Symptoms: Narcissistic Abuse Syndrome

It’s common for people who have experienced a relationship with a cluster b personality, like a narcissist or sociopath, to describe them as having a Dr. Jekyll and Mr. Hyde personality, but what many victims have a hard time accepting is that narcissists are not splitting (like Jekyll and Hyde). They have two faces. 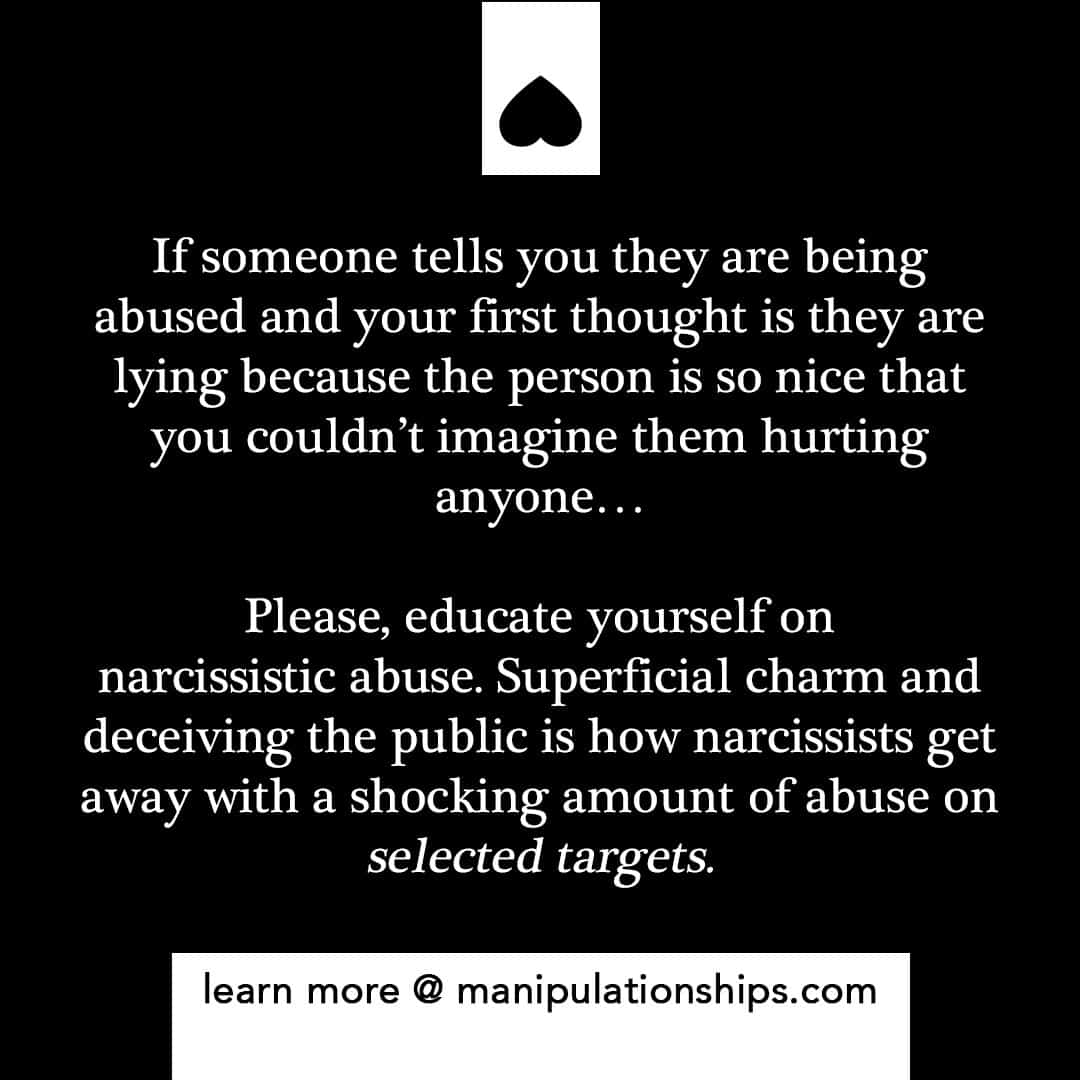 Narcissistic relationships can be hard to detect. People do not usually understand when it’s happening because narcissists are quite skilled in manipulating and controlling people without them suspecting they are doing anything wrong.

That's why they get away with an incredible amount of abuse.

Some of the top Google searches suggest most people start searching for answers when they are in narcissistic relationships with romantic partners, getting a divorce, co-parenting, parents and bosses, but make no mistake, they can be formed in any type of relationship.

Victims Are Not Believed!

The victim's reaction to being mentally abused is most often what outsiders will see. The abuse itself will not be noticed and the victim can appear depressed, crazy, unstable, or even react to the abuse in toxic ways.

Most victims don't know they are being abused, but it will apparent in their mental, physical and spiritual health.

The person abusing them knows how to NOT appear like an abuser and covers their tracks well, in fact, they usually appear like the complete opposite and are often well liked.

Superficial charm and deceiving the pubic are the hallmarks of the narcissist's manipulationship tactics.

Narcissists love playing the victim card and they know exactly how to set up the narrative so it appears they are the victim. They manipulate and lie to outsiders and the true victim of their abuse appears like the problem to most people.

Sounds crazy right? That's because IT IS CRAZY.

Even with the best intentions, victims are often re-traumatized and invalided by friends, family, judges, law enforcement, therapist (Yes! most therapist), and anyone who they are brave enough to speak to.

It's really the type of mind screw that you can only truly understand it if you have endured it and started your healing process.

While the world is starting to listen, there is still a lot of work to be done. Please consider sharing this page to spread awareness about narcissistic abuse.

Guide for friends and family: "How To Help Narcissistic Abuse Victim" guides friends, family and loved ones to helping someone who is being emotionally and psychologically abused.

Let's look at some of the narcissists abuse tactics and then we will get into the symptoms of someone in a narcissistic relationship.

Narcissists are hardwired for manipulation. They manipulate the world around them to feel in control and received the benefits (narcissistic supply) that they need or desire. While each individual is unique, the manipulation tactics they use can shock victims at their similarities.

Let's go over the top 6 manipulation tactics that narcissists use to manipulate and control the people around them.

Gaslighting is a narcissists favorite tool. It's a form of psychological manipulation in which a person seeks to sow seeds of doubt in a targeted individual or in members of a targeted group, making them question their own memory, perception, or sanity.

Learn the symptoms of gaslighting abuse, examples, and how to shut it down

The gaslighter uses projection to diverts their actions back unto the victim, refusing to validate the victims claims. This could be cheating, starting fights/drama, acting crazy.

"You just love drama, it's always around you." Even though they may have been the one to start the conversation AND the drama.

"You just can't let it go" Could have been something you have caught the in a lie many times, even recently but they want to avoid taking any real responsibility.

Word salad is designed to confuse the F* out of you. While it's a form of gaslighting, it's not someone straight out denying your reality, but it sure does make you question what the heck just happened.

It’s a jumble up mix of words and phrases that don’t seem to be on topic, its nonsensical and just strung together. You might even think they are on drugs or something is wrong with them when you witness a narcissist performing word salad.

Triangulation is when two or more people are used against each other. The narcissists controls the narrative like a puppet master as they love fostering jealousy, mistrust, and sometimes abuse between others.

This  gives the narcissists huge hits of attention, power, control, and drama and it only works because the people being traigulated against each other have little or no healthy communication.

The goal is to divide and conquer.

Stonewalling is a refusal to communicate, stalling or evading. Narcissists will refuse to engage in conversations and behave as if you, your concerns, or the topic you want to discuss have no value and do not deserve their attention.

Narcissists have invested a great deal of time into the development of their masks. The mask is the side they show to the public and only a selected few will see it fall.

They have learned what works in manipulating people. They know the body language, what to say, and what to do to get others to believe in their mask.

Narcissists suppress their true feelings and personality so they can get what they desire in the real world. They are hardwired for manipulation and this developed skill is underestimated by most. Some are more skilled than others, it just depends on their goals in the world.

Am I being abused? Someone who has experienced long-term emotional abuse by an abusive personality disorder, such as narcissistic, borderline, histrionic, psychopathic, or antisocial can be suffering from Narcissistic Abuse Syndrome or signs of emotional abuse.

People can spend years walking around in darkness, not knowing what they are going through even if they see a therapist because most therapists do not have training around this topic. This can feel very isolated and lonely.

Here are some symptoms that you may be experiencing if you have narcissistic abuse syndrome. You can experience these symptoms while you are still in the relationship.

How do you handle a narcissist?

How do you handle a narcissist?

Why do they have dull dead eyes?

Why do they have dull dead eyes?

Do they regret losing people who loved them?

Do they regret losing people who loved them?

Playing victim mean they have NPD?

Playing victim mean they have NPD?

How can you disconnect emotionally from the toxic person?

How can you disconnect emotionally from the toxic person?

How do narcissists feel when you leave them?

How do narcissists feel when you leave them?
Load More

Any information found on or derived from this website should not be a substitute for and cannot be relied on as any legal, medical, financial, marital, therapy or other professional advice.  If you require any such advice, please consult with a licensed professional before taking any action.